Therapeutic program of GERD in China

With the support and efforts of experts from the society, the diagnosis and treatment level of GERD in China has been rapidly improved. However, at present, the medical popularization and education of GERD in China are still seriously lacking and unbalanced, and medical staff have insufficient understanding of the disease, and the examination rate and radical cure rate are both low, which leads to the long-term missed diagnosis or misdiagnosis of "cough, asthma, pharyngitis" caused by gastroesophageal reflux, and the overall diagnosis and treatment level is still far behind that of the international community.

In view of this, the China council for the promotion of health care formulated the multidisciplinary diagnosis and treatment consensus of GERD in China, aiming to enhance ability of the standardization of the medical staff of GERD, maximum improve the quality of life of patients with GERD. Compared with the developed countries in Europe and America, GERD treatment in China is still dominated by drugs, and the understanding of surgical treatment is limited. Laparoscopic anti-reflux surgery (laparoscopic esophageal hiatal hernia repair and gastric bottom folding )in China is still in the promotion stage, surgeons need to participate in a lot of standardized training, to ensure the success rate of surgery, and to reduce postoperative recurrence and complications.

Combinations are often more effective than mono-therapies. For best results, these drugs are often used in combination. Studies have shown that PPI combined with gastrointestinal motility agents and/or gastric mucosal protectants can further reduce reflux load, reduce inflammatory injury and accelerate the relief of reflux symptoms.

PPI is the first choice for the treatment of GERD, which can rapidly relieve the symptoms of most patients and reverse some of the complications of GERD.

Before PPI was developed, H2-receptor ant agonists (H2RA) were the main drug to treat GERD. H2RA and PPI are commonly used drugs to treat GERD. H2RA is more effective in controlling nocturnal acid secretion, which can be combined with two drugs to control nocturnal acid breakthrough. These two drugs are safe, effective, well tolerated and have few adverse reactions in the treatment of GERD.

Patients with mild symptoms, occasional or no complications can be relieved with medication, and relapse is not easy. Patients with moderate and severe symptoms and/or complications of GERD need long-term treatment. Continuous use of PPI for 2 times /day for 4-8 weeks can effectively control acid reflux in 90% of patients, but not in about 25% of patients.

PPI is still the preferred medication for extra-esophageal symptoms, and other drugs include H2RA, gastrointestinal motility drugs, and gastric mucosa protectors, etc. Compared with typical symptoms, it is usually necessary to increase the dose and extend the course of treatment, and the curative effect satisfaction rate is relatively low, which may be related to the joint participation of gas reflux, non-acid reflux, bile and digestive enzymes in addition to acid reflux. After 3 months or 6 months of treatment, 66% of patients have relief of extra-esophageal symptoms and can stop the medication, while 25%~ 50% of patients need long-term medication.

The latest American colleges of gastroenterology practice guidelines indicate that PPI is safe for pregnant women with clinical symptoms. GERD management during pregnancy must be individualized, and antacids or suffocates are considered first-line therapeutic agents. If symptoms persist, use H2RA. PPI may also be used if the symptoms are persistent or complicated reflux. All the drugs except omeprazole are Class B drugs of the US food and drug administration. Most drugs are excreted through breast milk, and only H2RA can be safely used during lactation.

PPI is the preferred treatment for GERD in children. It has a shorter half-life in children than in adults. Antacids, especially those containing aluminum, may cause osteopenia, rickets, small-cell anemia, and neurotoxicity. H2RA has a risk of liver disease and male breast development. Gastrointestinal motility drugs may help improve efficacy, but there is insufficient evidence to support their use in GERD in children.

The annual direct cost of GERD management in the United States is $971 per patient, with national expenditures ranging from $9.3 billion to $12.1 billion. In addition, the care cost of patients with esophageal reflux is 5.6 times that of GERD patients in the United States, which is more than 50 billion dollars, even higher than the medical burden of tumor. This indicates that GERD patients have a large demand for PPI and other drugs, long-term use and even overuse.

PPI is relatively safe in most patients, and adverse reactions are rare. Dyspepsia, nausea, diarrhea, vomiting, pain, allergy and granulocytopenia can be found at the initial stage of medication. However, erosive esophagitis, peptic stricture, Barrett esophagus, centrality obesity, HH and part of the esophageal reflux patients need long-term use of PPI, should pay attention to the potential risks of long-term use of PPI (such as osteoporosis, cardiovascular disease, chronic kidney disease, upper gastrointestinal tumor caused by increased risk of death, etc.). Regularly assess the long-term daily use of PPI, formulate the minimum effective dose to reduce risk. When it is necessary, consider endoscopic and laparoscopic anti reflux therapy. 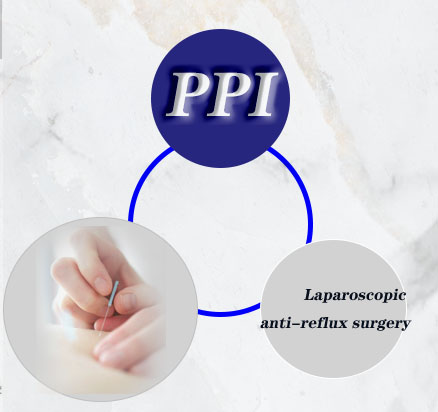 In China, acupuncture is one of the non-drug therapies to treat GERD.