The number of people with esophageal cancer and gastric cancer in China accounts for 1/2 of the total number of cases in the world.

To improve early cancer screening and standardized treatment is the problem that Chinese endoscopy association and all experts are working together to solve.

The successful rate and management of complications are the core factors of whether an operation can be well promoted and benefit patients.

This article focuses on Chinese endoscopic physician's experience and experience in the treatment of stenosis in ESD surgical complications in recent years.

This article is from Professor Yang Shiming: endoscopic management of esophageal stenosis after ESD operation for early esophageal cancer.

The Japanese esophageal association (JES) proposed that the relative indication of ESD was the 3/4 or even full circle lesion, which also increased the incidence of esophageal stenosis after ESD.

2. Definition and incidence of stenosis

The incidence of benign esophageal stenosis with dysphagia after ESD increases with the increase of lesion range.

The incidence of esophageal stenosis is 20% when the lesion range is between 1/2 and 3/4 of the periesophageal circumference.

When the lesion area is 3/4 circumference or larger, stenosis occurs in 90% of patients.

Two important features of wound healing after ESD are the appearance of fibroblasts and the destruction of intrinsic muscle layer.

The first week after the operation, the ulceration of the esophagus was mainly manifested as inflammatory response, accompanied by obvious fibrous hyperplasia and angiogenesis, but there is no obvious squamous cell proliferation.

The first step of prevention is to improve ESD skills.

Below are the main methods to prevent stenosis.

Methods: mucosal defects >3/4 of periesophageal circumference, endoscopic dilatation was performed 1 week after surgery. It is performed once a week. After 6 times treatment, the results were compared in the following table:

Methods: mucosal defects >3/4 of periesophageal circumference, stent was implanted immediately after the operation. The stent was taken out 8 weeks later.

Disadvantages: intractable pain. In both patients, stenosis was caused by displacement. The author suggested re-examination of gastroscopy and adjustment of stent position at an interval of 2 weeks.

Principle: 1）. Anti-inflammatory 2.） Directly inhibit the proliferation of fibroblast so as to reduce the degree of fibrosis in the lesion.

2.Local injection of glucocorticoid: mucosal defects >3/4 of periesophageal circumference,  immediately inject triamcinolone acetonide with multiple points directly into the exposed submucosa, avoiding the exposed intrinsic muscle layer The injection concentration is 5 mg/ml and a total dose is about 100mg.

Methods: triamcinolone acetonide gel was formed by mixing 10ml triamcinolone acetonide (100mg) and 7.5ml endolubri colloid. The gel was spirally sprayed from the distal end of the artificial ulcer to the proximal end with a spray tube. Then, balloon (diameter 1.2-1.5cm) was immediately used to dilate the artificial ulcer for 5 min, allowing the gel to penetrate the artificial ulcer. Steroid gels work by penetrating the ulcer surface without causing perforation, bleeding or other complications, therefore it is safer, easier and more effective than oral and injection methods.

Principle: mitomycin C ,as a kind of cell cycle non-specific chemotherapy drugs, through the cross joint with DNA, shall inhibit DNA synthesis. At the same time it has certain inhibition to RNA and protein. Mitomycin C can inhibit fibroblasts proliferation, and inhibit the secretion of type I collagen fiber, thus it prevents scar formation in artificial ulcer healing process, resulting in the effect of prevention of stenosis.

Cases study: 5 patients with severe esophageal stenosis after ESD surgery, after several (5-17) times of EBD and local hormone injection treatment, the result were ineffective, and the dysphagia was progressively aggravated.

After EBD, 1.5ml (0.5mg/ml) mitomycin C was injected into the submucosa of the dilated location during the endoscopic view. After 8 weeks, dysphagia recurred in 3 patients. After the injection of mitomycin C again, dysphagia was significantly improved in all patients.

After removing the transitional cell layer of pig bladder mucosa, the retained basement membrane and adjacent muscularis propria were treated with decellularization and disinfection to form tubular ECM scaffolds. ECM scaffold does not have proinflammatory effect after decellular treatment, and it can adapt well to ulcer healing process. It contains a large number of cellular active components (growth factors, etc.), which can promote tissue repair.

A small piece of mucous membrane was taken from the buccal side of the pig's mouth for preparation of keratinocytes two hours before the operation of esophageal EMR, and 2ml phosphate buffer containing (1-5) * 106 keratinocytes was injected into the wound immediately after the operation of EMR (diameter about 2CM). Two weeks later, the ulcer epithelium at the treated location was completely regenerated without scar formation, while the ulcer at the comparison location was not healed and was with scar formation. 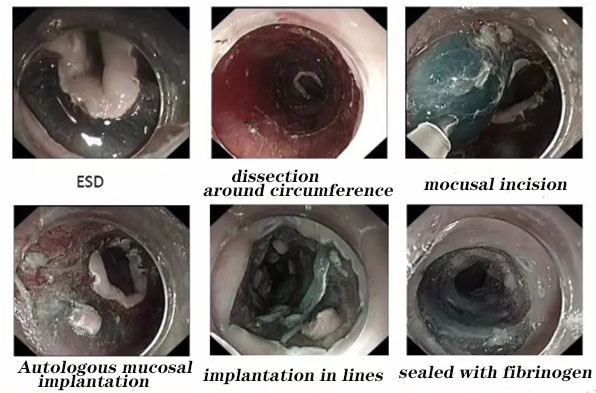 Here we introduce you with one case of gastroesophageal mucosa transplantation. The patient has a wide range of circumferential early-stage esophageal squamous carcinoma, and had the ESD operation with periesophageal circle which is about 10CM long.  Afterwards, he had the second ESD operation in the gastric antrum front wall and the mucosa with 9 CM length, t 4 to 6 CM wide was taken and divided into 3 pieces. Fix the mocusa onto the esophageal wound with a metal stent. 20 days later, the stent was taken out.  In 32 months of follow-up after surgery, patients did not have obvious discomfort.  Gastroesophageal mucosa transplantation, as a new method to prevent the ESD postoperative esophageal stenosis , requires further study on its feasibility, effectiveness, and safety. 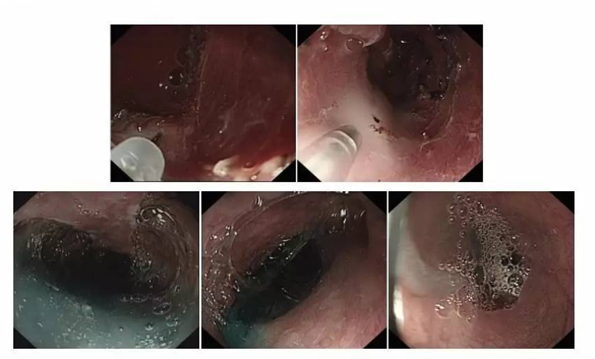 Triamcinolone acetonide is wrapped in gelatinous material, which could prevent its loss, and achieve the better prevention effect.

In conclusion, currently, there is no standard treatment for the prevention of stenosis after ESD, the number of cases of the above methods is relatively small, and the sample size needs to be expanded for clinical verification. The effect of combination of treatment methods (eg. drug stents?) remains to be studied.