One 78-year-old female patient was admitted to hospital on June 1, 2018 due to "intermittent abdominal pain with fever for 10 days".

Cholecystolithiasis after cholecystectomy is the patient's history.

The patient was diagnosed with acute cholangitis and choledocholithiasis.

the patient was given fasting and anti-infection treatment after admission, and underwent endoscopic retrograde cholangiopancreatography (ERCP) on June 6, 2018 (figure 1 and figure 2). 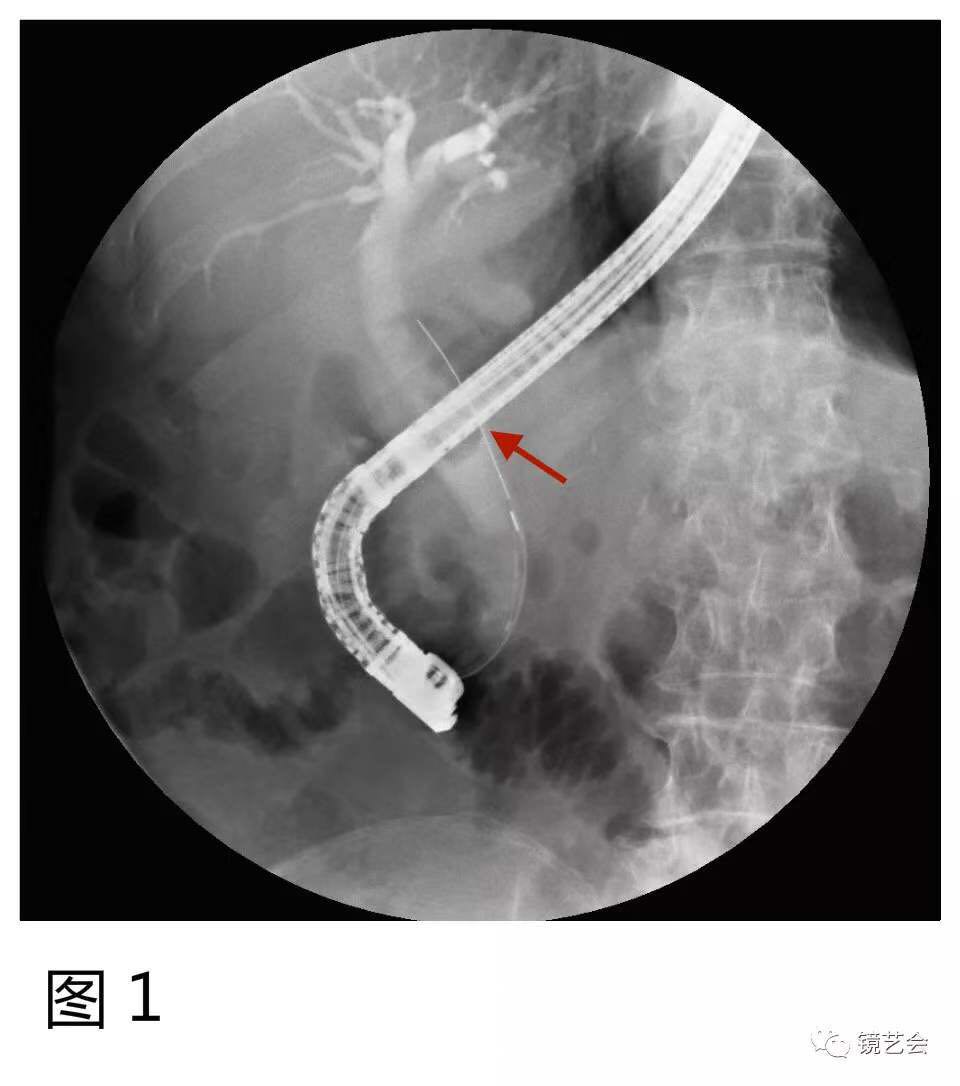 Large stones in the middle of the common bile duct (1.1 cm).

The widest expansion of the common bile duct is 1.8cm.

A. basket for bile duct stones;

B. The modified nasal bile duct was implanted.

During the operation, 1.1 cm image defect was found in the middle segment of the common bile duct, other image defects were found in the lower segment, and the middle and upper segment of the common bile duct expanded in the diameter of about 1.8 cm. The papilla was cut, and multiple stones and purulent secretions were repeatedly removed with stone basket and balloon. A 7.0 Fr x 20 cm plastic stent, modified by nasal biliary tube was then inserted into the bile duct. Then we performed the duodenal papilla plasty.

There was no bleeding, perforation, acute pancreatitis and other complications after the operation, the patient's temperature was normal, abdominal pain was relieved, and the patient was discharged from hospital after the condition was stable.

Three weeks after the operation, the patient was admitted to hospital for biliary stent removal (figure 3). In order to evaluate the repair of the duodenal papilla, the pressure of the Oddi sphincter was measured at the same time. The results showed that the common bile duct pressure (CBD), the Oddi sphincter base pressure (BP) and the time-phase contraction (PCA) recovered to 2 mmHg, 11 mmHg and 27 mmHg, respectively.

The biliary stent was removed and the pressure was measured in the Oddi sphincter.

MRCP indicated that the widest expansion of the common bile duct was 1.0cm.

No bile duct stones and stricture were found

The patients were followed up for seven months and there were no symptoms of abdominal pain or fever. The results of blood routine and liver function tests were normal. MRCP showed the width of the common bile duct of 1.0cm, and no choledocholithiasis (stenosis) was observed (figure 4). Duodenoscopy showed scarring healing of the duodenal papilla (figure 5), suggesting that the patient's Oddi sphincter was effectively restored in terms of function and structure.

5A is the preoperative image of ERCP;

5B was the images at 7 months after ERCP and EEPP

At present, major or minor incision of the papilla combined with large balloon dilation is the main method for endoscopic physicians to deal with large stone in common bile duct, but both of these methods can lead to irreversible damage to the sphincter of the papilla. The results showed that the incidence of choledocholithiasis and biliary tract infection after EST was 3.2%~21.3%.

Bacterial infection of biliary tract after sphincter dysfunction is considered to be the main cause of recurrence of choledocholithiasis.

Professor Dong Jiahong's team tried to apply the duodenal sphincter repair of Oddi, and the long-term effect was satisfactory, but the incidence of perioperative complications in bile leakage and stone residue operations was 14.2%.

In order to reduce the recurrence of bile duct stones and biliary tract infections caused by the large incision of the duodenal papilla in the process of bile duct stone removal, Prof. Huang Yonghui's team carried out an innovative new technology and initially tried to apply the hemoclips for duodenal papilla shaping. The technique has not been reported, and the case was followed up for six months with good results.

After animal anatomy and oddi sphincter pressure measurement, the preliminary results confirmed that the duodenal papillary shaping with hemoclip could effectively restore the function of the patient's bile duct sphincter, and no recurrent choledocholithiasis or papilla stenosis occurred in this patient after a 7-month follow-up.