Matters requiring attention in the operation of biopsy

Biopsy, upon the request of diagnosis and treatment, refers to the pathological examination technology of taking the lesion tissue samples from the body of the patient by cutting, forceps grasping, or puncturing the tissues. It is the final gold standard for disease diagnosis. The application of biopsy forceps is one of the most commonly used accessories by endoscopic physicians and nurses.

Alligator biopsy forceps:  to be suitable for biopsy on hard tissues such as tumors. 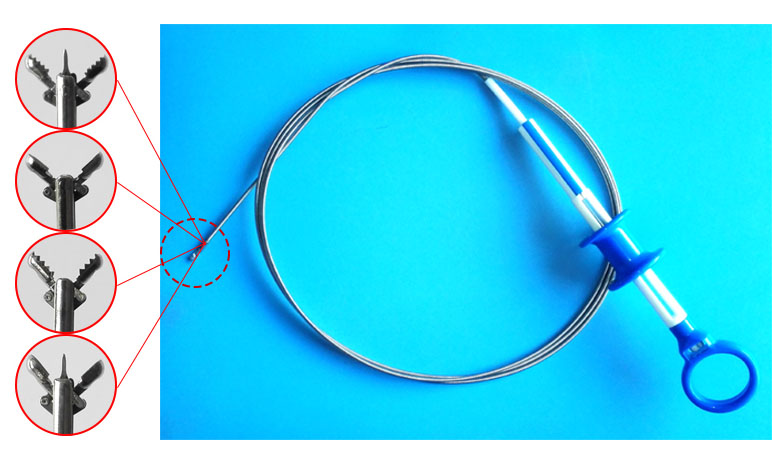 1. Inquire the medical history of the patient, especially the history of taking anti-coagulant medication.

2.There are intensive blood vessels on the gastric fundus. Pay great attention when biopsy. Avoid biopsy on the locations with suspect of large blood vessel.

4. For deep ulcer, do not take biopsy in the deepest part of the ulcer center to prevent perforation.

6.For large lesions, take the biopsy from the distal lesion and then from the proximal lesion. Based on the blood flow direction principle, it could reduce bleeding in this case.

7. Prepare all the devices before biopsy. The nurses are required to react quickly and do the operation gently and fluently.

8. The best way to remove the biopsy tissue from the biopsy forcep is to use a blunt dental probe. Do not press the tissue. Excessive compression may crush the biopsy tissue. Do not shake the stationary fluid bottle,otherwise it could cause epithelial detachment or loss of micro-organism, such as streptococcus albicans.

9.Biopsy forcep is disposable. Reusable biopsy forceps should be sterilized before use.

10.The hyperplasia has strong inflammatory reaction which cannot be taken for biopsy.

11.Regarding the hollow lesion , do not take biopsy from the central raised area, which has the risk of bleeding and perforation.

12.Take biopsy from the rims of the ulcer.

13. The first piece sample is crucial. Bite from the submucosal lesion. The second piece cannot be taken when it is bleeding after the first piece.