American digestive diseases week (DDW) is the world's largest and most prestigious professional conference on gastrointestinal tract. Each year, nearly 15,000 top gastroenterology, gastrointestinal surgery, endoscopy and hepatology physicians and scholars from all over the world are invited to participate and discuss the most cutting-edge progress of this field.

This year, ESD endoscopic surgery video of early hypopharyngeal cancer from China won the second place in the "endoscopic World Cup" and won wide attention in the industry. After the meeting, Professor Xu Meidong, a surgical surgeon stated thatChinese physicians have been making efforts to improve the technology and broaden the scope of endoscopic treatment. It is an honor for both Chinese endoscopic physicians that Chinese endoscopy technology can be accepted by the world and become the center of the world stage.

Why ESD treatment of hypopharyngeal cancer hasbe recognized in DDW, which always focuses on technology and creativity?

We wish to draw your attention on this disease.

Hypopharyngeal cancer is not common, accounting for only about 3%-5% in head and neck malignant tumors, and the incidence rate of the population is less than 1/100,000.

However, due to its hidden location and asymptomatic early stage, most patients are already in the late stage when they seek medical treatment, and it is also prone to cervical lymph node metastasis. The 5-year survival rate is only around 30%, and the clinical efficacy is not satisfactory. Traditional treatment is mainly radiotherapy or surgery. Although radiotherapy has little trauma, there are many complications, such as taste loss, radioactive dermatitis, dry mouth, laryngitis, persistent dysphagia, etc. After total laryngectomy, the patient loses the function of taste, swallowing and voice. After surgery, the patient cannot return to social life and shall lose life quality.

Therefore, early diagnosis and treatment of hypopharyngeal cancer is of great significance !

The histological pattern of the hypopharynx is similar to that of the esophagus, both of which are squamous epithelium. Superficial carcinoma is a superficial lesion that is confined to the epithelium or subepithelium but does not invade into the muscular layer. According to WHO classification, high-grade intraepithelial neoplasia, carcinoma in situ and microinvasive carcinoma of pharynx can be diagnosed as superficial carcinoma of pharynx and 95% as squamous carcinoma. Most of them occur in the piriform fossa area of the larynx and pharynx, and their endoscopic manifestations are similar to those of early esophageal cancer. It shows red or roughmucosa membrane under white light, the NBI brown area (including other optical coloring) and iodine staining are absent, which are obvious abnormal indications. Lugol iodine staining is not suitable for routine screening because of its large irritation. NBI pigmentation endoscopy shows that type IV and type V of IPCL classification has a hint and diagnostic value for dysplasia or superficial cancer. 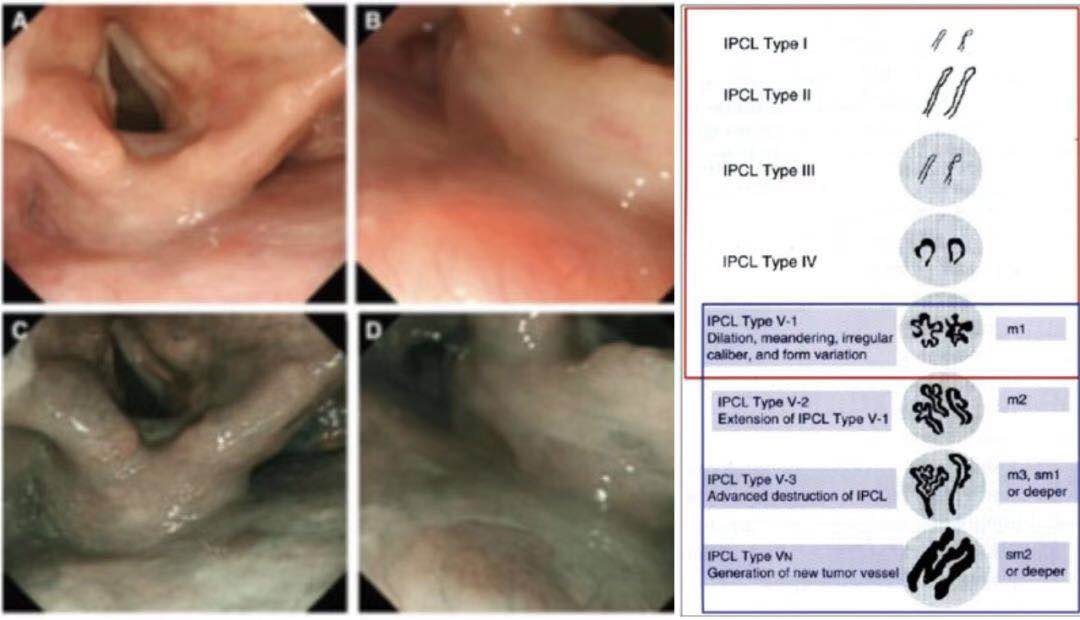 For patients undergoing routine painless gastroscopy without nausea and vomiting reflex, the endoscopic doctor needs to pay attention in observation during examination. It only takes 1-2 minutes with special attention, many precancerous lesions and early cancers of the hypopharynx could be detected and diagnosed as early as possible. The vast majority of early cancers of the hypopharynx can be treated with ESD through gastroscopy and can achieve a curative effect. Therefore, the significance of early cancer discovery here may be with greater significance than that of other early cancers. Due to its low incidence, routine laryngoscopy has not been included in the screening program. However, gastroscopy has been recommended as the first choice of health examination program for people over 40 years.

Therefore, for high-risk groups, such as middle-aged and elderly men, who have a long history of smoking and drinking, have a history of early upper gastrointestinal cancer, especially those with foreign body sensation in the throat and swallowing obstruction, we should pay more attention in gastroscopy. Clinical studies have found that 6.7% to 11% of patients with esophageal cancer are associated with pharyngeal cancer (simultaneous or heterogeneous), which means that patients with esophageal cancer are often associated with a high risk of early hypopharyngeal cancer.

Therefore, when we conduct endoscopic screening for early gastrointestinal cancer, especially for patients with history of esophageal cancer, nasopharyngeal cancer or other digestive tract tumors, careful observation of the pharynx may change a patient's life. 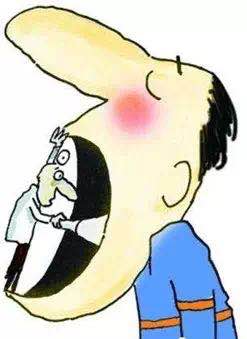 There are only a few related literature reports on endoscopic ESD treatment of early hypopharyngeal cancer in Japan, and only a few endoscopic experts in China have explored this. According to the experience of more than 20 cases of Prof. Xu Meidong, endoscopy center of Shanghai Oriental hospital, it is suggested that the indications are high-grade squamous epithelial neoplasia, carcinoma in situ or superficial epithelial carcinoma confirmed by preoperative pathology, and lymph node metastasis excluded by CT or PET. Contraindications are the accumulation of lesions in the whole or bilateral piriform recess, as well as lesions involving the deep submucosal layer above.

During endoscopic treatment, the left lateral decubitus position was routinely applied, and conventional transoral or selective transnasal endotracheal intubation was used. Different measures could be taken to elevate the larynx and expose the pharynx.

NBI and Lugol staining were used to assist in determining the range. However, due to the narrow hypopharyngeal space, the instrument and endotracheal intubation will interact with each other, so it is difficult to operate and requires great care and patience to reduce complications such as bleeding, subcutaneous emphysema, perforation, laryngeal edema and temporary paralysis of vocal cords. Among them, laryngeal edema is the most serious possible complication of endoscopic treatment, which is related to local submucosal injection during operation and too long operation time. Hormone can be applied throughout the body before resuscitation and extubation or delayed extubation. Strict observation after operation is required. If necessary, make tracheotomy. 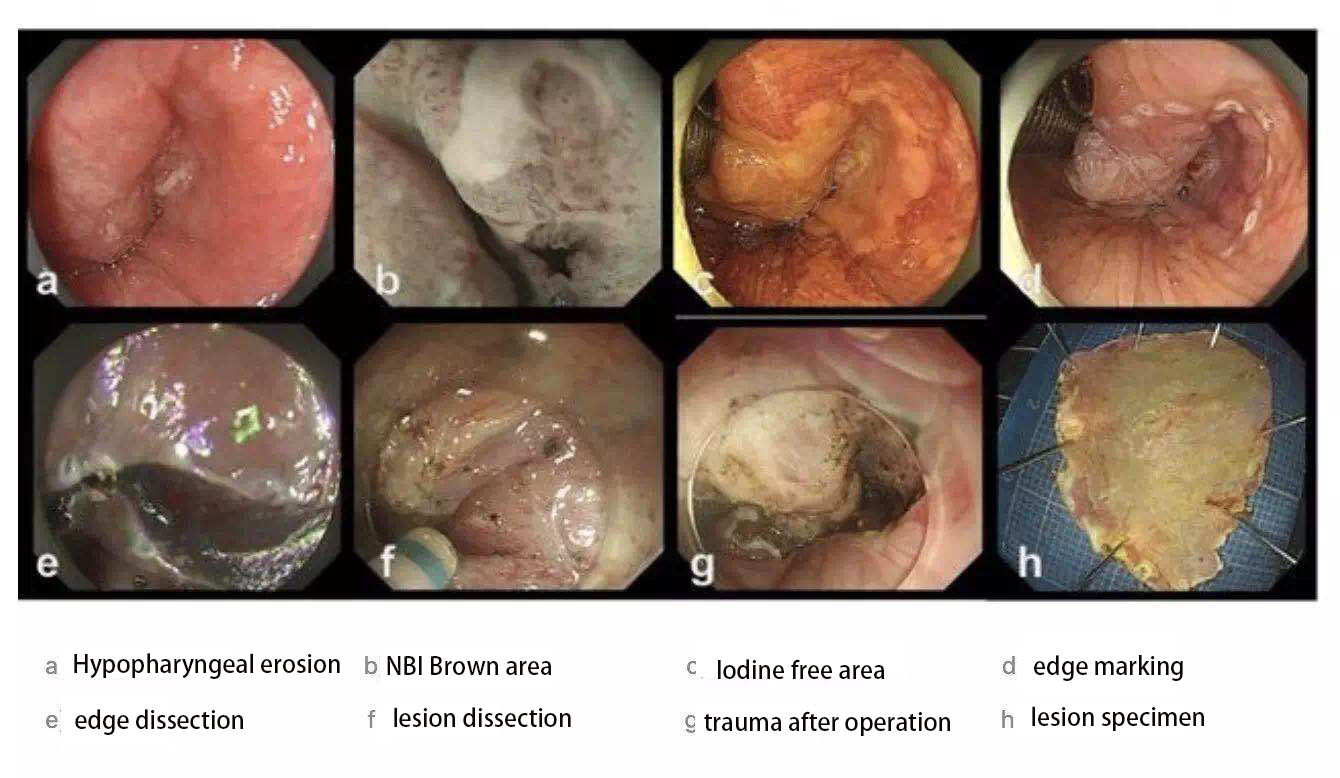 ESD postoperative follow-up results of early hypopharyngeal cancer were satisfactory, with a 5-year survival rate of 84.4% and a 5-year etiology-related survival rate of 100%. Most of the causes of death were due to other diseases, most of which were esophageal cancer. Therefore, early diagnosis and early treatment under endoscope is of great clinical significance for early hypopharyngeal cancer.