In this year’s Nanjing Chinese National Endoscopic Congress, one of the most important themes is the protection and functional recovery of sphincter of Oddi. 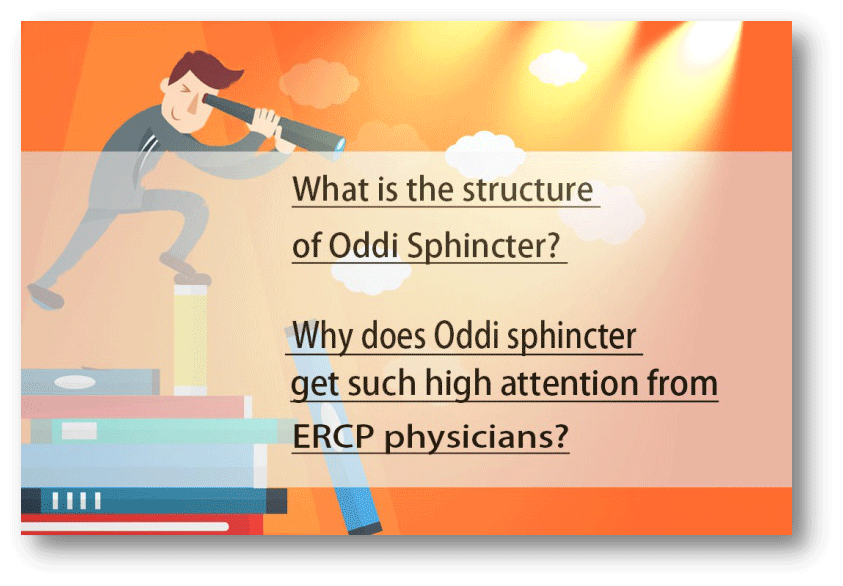 Sphincter of Oddi is a group of muscles that originates from ventral basal part of the foregut around the end of the biliopancreatic duct. In human body, it came into being about 5 weeks after the appearance of the duodenum.  As early as 1600, French anatomist FrancisciGlisso-ni speculated the existence ofsphincter and its location is at the end part of common bile duct. It was not until more than 200 years later that Dr. RugeroOddi formally described this muscle group and defined its function as controlling bile excretion.

Since 1930S, a large number of scholars have gradually unveiled the structure and function of the Oddi sphincter by combining medical technology as tanatomy, electrophysiology, radionuclide scintigraphy and biliary manometry.

The sphincter Oddi is presently known to consist of three different groups of muscles: biliary duct sphincter, pancreatic duct sphincter and duodenal sphincter. It has three main roles: regulating the discharge of bile and pancreatic fluid into duodenum, promoting movement of bile into gallbladder for storage, and preventing duodenal fluid reflux into the biliopancreatic duct.

Its main function is probably to expel bacterial and tissue fragments from the Oddi Sphincter in time to keep the end of the biliopancreatic duct unobstructed.

Although the basic structure and function of sphincter Oddi have been revealed, its fine and complex neuroregulatory mechanisms remain unclear.

The injury on the structure of Oddi may destroy its function and lead to disease of biliary and pancreatic duct. When the function of Oddi is destroyed, the anti-reflux mechanism is no longer working. Fluid in the duodenum is flowing into the bile duct and pancreatic duct, which shall lead to the gas deposit and contamination in the duct. It may lead to diseases such as insecondary stone in common bile duct, recurrent cholangitis and cholangiocancinoma.

The previous research indicated that the basic pressure to maintain the sphincter function disappeared completely even 15 years after EST operation.Only 25% patients could be observed with phase contraction

After EST, common bile duct stone happens 2~5 years with ratio 3.2% ~22.3% , all of which are pigment stones cause by bacterial contamination

For the protection and recovery of Oddi sphincter function, China has made prospective researches which are considered from different dimensions and conducted in the interdisciplinary scope:

1. In China, ERCP and EST operations have replaced open surgery and becomed the first choice in treatment for biliary stone with diameter less than 1 cm. In China, professional training management has been paid with great emphasis. The students need to perform under 100-200 cases before getting the license.

2. Transduodenalsphincteroplasty: the first choice for operational injury ofOddi sphincter, aiming to restore the structural integrity of sphincter of Oddi and let it recover the function in a positive way.

3. The newly issued Rome IV consensus has abandoned the diagnosis of type III SOD and redefined the classification of type III biliary SOD. At present, sphincterometry and Oddisphincterotomy are not recommended for such patients.

4. After EST operation and stone retrieval operation from bile duct, repair the sphincter by closing it up with clip.（No.3 Hospital of Peking University，2018）

5. ENBD+LC+LCBDE are combined in the treatment of gallbladder stone and bile duct stone. It is a safe and effective treatment method and it could protect the function of Oddi sphincter and therefore lower the rate of complications.(Huashan Hospital to Fudan University AffiliatedHuashan Hospital)

6. Acupuncture of "QI MEN" and "TIAN SHU" in guinea pigs can significantly inhibit gallbladder movement, promote EMG discharge of Oddi sphincter, and reduce the bile flow into duodenum. Acupuncture of "YANG LING QUAN" can significantly promote gallbladder contraction, inhibit EMG discharge of Oddi sphincter, and promote the increase of bile flow in guinea pigs. The effect of "Yanglingquan" is has more obvious effect.

( Institute of Acupuncture of Academy of Chinese Medical Sciences)