Highlights of endoscopic practices and endeavors in China 2020

In the 19th National Congress of the Communist Party of China, President Xi pointed out that the implementation of the Healthy China strategy requires the improvement of the national health policy and the provision of all-round full-cycle health services for the people. In July 2019, the State Council issued the Opinions on the Implementation of the Action for a Healthy China, which proposed early intervention, improved services, and early effective intervention measures for major health problems and their influencing factors, and improved prevention and treatment strategies.

In response to the strategic call of the CPC Central Committee and the State Council, the domestic digestive endoscopy industry has put forward a number of consensus guidelines and promoted a number of innovative technical theories in the field of early diagnosis and treatment of gastrointestinal cancer, so as to realize early diagnosis, early treatment and early recovery of gastrointestinal cancer.

The newly proposed Expert Consensus on Screening for Early Esophageal Carcinoma and Precancerous Lesions and Expert Consensus on Screening Procedures for Early Colorectal Cancer in China and the previously proposed Expert Consensus on Screening Procedures for Early Gastric Cancer in China (Draft) basically constitute the theoretical basis for early prevention of gastrointestinal cancer in China. On the basis of the theory of prevention of early gastrointestinal carcinoma, the main treatment of endoscopic submucosal dissection surgery (endoscopic submucosal dissection, ESD), the bleeding and injury to the muscularis propria can occur in the submucosal injection, pre-cutting, all phases of the submucosal dissection to lesion resection. While, hemorrhage shall affect the operation vision.  And full-thickness injury to the muscularis propria is serious complication, which is directly related to the success or failure of ESD operation. 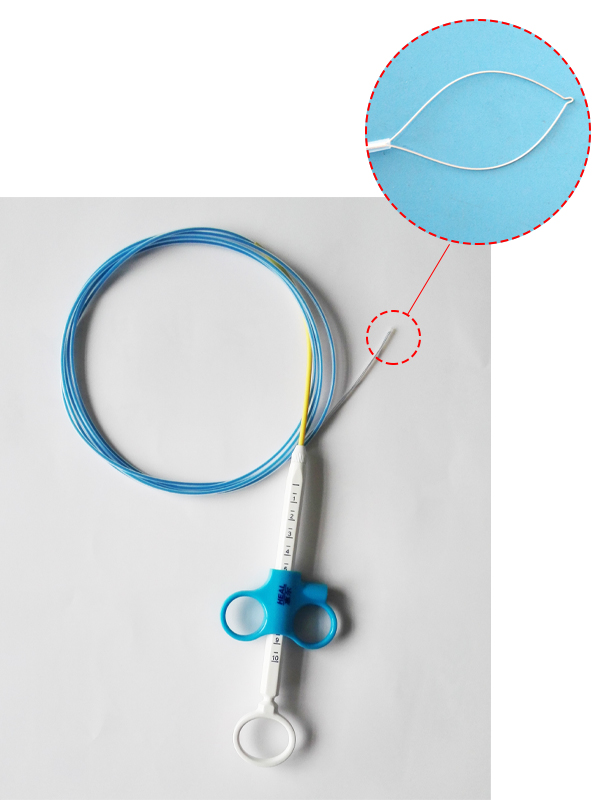 The classification standard will be promoted nationally, help the assessment of bleeding complications, degree of lesion adhesion, the precise identification of wound, so as to define the difficulties of endoscopic surgery and the level of the operator. All these will contribute to the formulation and standardization of treatment strategies for early gastrointestinal cancer in the future.

In 2020, due to the COVID-19 epidemic, hospitals around the world will not be able to perform routine endoscopy. To meet the patients’ request of endoscopic inspection, the Chinese medical association branch of digestive endoscopy science carried out "the contactless gastroscope”. The capsule endoscopy diagnosis and treatment was used during the epidemic prevention and control work. Instruction opinion and national standardization in gastroscopy of magnetic control capsule was made out for the safety of diagnosis and treatment.

Conventional endoscopic examination is an invasive examination that produces a large number of droplets and aerosols. Viruses can be transmitted through the air and touchable objects, which increases the risk of cross-infection between doctors and patient. Magnetic-controlled capsule gastroscopy is a single-use non-invasive examination that does not require anesthesia. Physicians and patients are physically isolated from each other in space and do not need to face each other in the whole process. Real-time communication is maintained through video and voice, and systematic and comprehensive gastric examination is performed on patients by remote control technology. The risk of cross-infection is eliminated from the source.

2.  Skin graft to prevent the stenosis after endoscopic resection of early carcinoma of the whole circumferential esophagus

The incidence of stenosis after endoscopic resection of early carcinoma of the whole circumferential esophagus is as high as 100%, and patients are very likely to suffer from dysphagia, restricted eating and other symptoms, which seriously affect the quality of life.

The team carries out the contrast test of grafts implantation with sole esophageal stenting regarding the prevention of esophageal stenosis, related research is published in the European society for endoscopic surgery official journal Surgical Endoscopy. 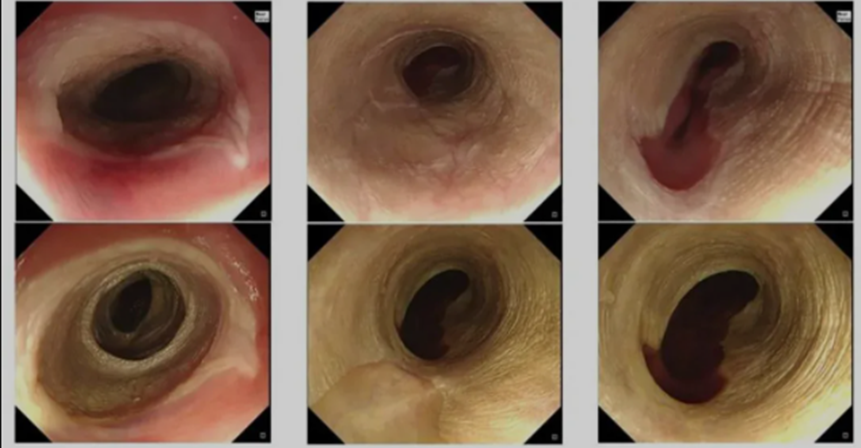 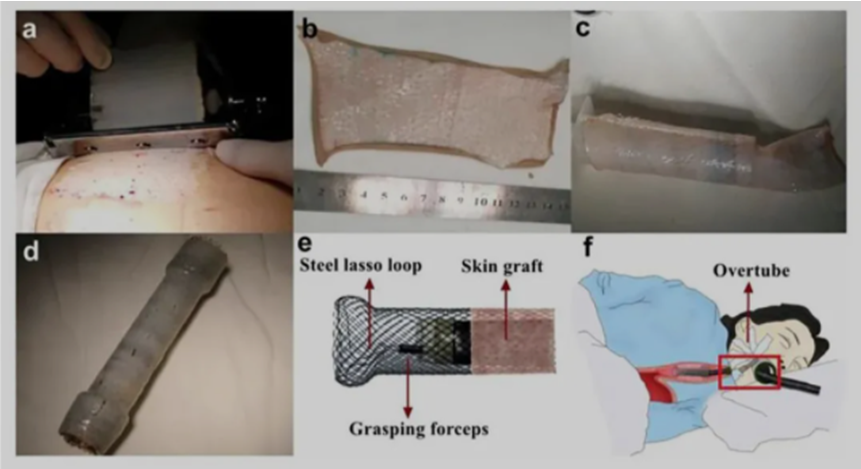 3. D-POEM for the treatment of esophageal diverticulum

The gastroenterology team of Jiangsu Provincial People's Hospital successfully treated 8 patients with esophageal diverticulum with the Endoscopy D-POEMS, of which 4 patients have achalaxia of the cardia. The research results were published in Endoscopy.

The interdiverticulotomy and achalasia POEM can be performed simultaneously in the same tunnel. As the ridge of the diverticula is cut off, the diverticula disappears, and the "little pocket" into which food would otherwise leak disappears, so that food does not incarcerate. The key to the success of this operation lies in the digestive endoscopic tunneling technique, while preserving the esophageal mucosa, which can effectively avoid perforation and infection. The location of the diverticulum and the length of the interesophageal ridge did not affect the success of the operation.

New lumen-apposture metal stents (LAMS) triggered a near revolutionary development of EUS interventional technology. Different from the concept of simple expansion of the stenosis by the traditional stent, the stent adopts the method of anastomosis between lumens to achieve the purpose of drainage or removal of obstruction.

LAMS is characterized by large diameter, good wall adhesion and easy operation of "one-step method". It can not only more effectively drainage, reduce the risk of stent displacement, blockage and gastrointestinal fistula, but also provide a safer and faster channel for further interventional treatment.

LAMS has broadened the therapeutic field of digestive endoscopy and has become a hotspot of academic research.

Since all kinds of LAMS have not been listed in China and foreign products are expensive, it is of great significance to accelerate the innovative research and development of domestic LAMS stents to improve the level of medical service guarantee in China and improve the international academic status of digestive endoscopy in China.

3) EUS-guided gastrojejunostomy: EUS-guided gastrojejunostomy is an effective method for the treatment of gastric outlet obstruction (GOO), enabling patients to avoid surgical treatment. Laparoscope-gastrojejunostomy (LAP-GJ) is the traditional standard surgical procedure for the treatment of GOO. The latest multi-country clinical study showed that the success rate of EUS-GJ was 100% and that of LAP-GJ was 88%. The incidence of adverse events was 41% in LAP-GJ and 12% in EUS-GJ, showing similar efficacy, but the incidence of adverse events was lower in the EUSGJ group.

With the development of imaging and physical examination awareness, the detection rate of generally asymptomatic pancreatic cystic tumors is increasing, attracting more and more attention. A study of radiofrequency combined with laurogol ablation at the PLA General Hospital showed an overall response rate of 95%. It is proved that radiofrequency combined with lauromacrogol ablation is a safe, feasible and effective method. However, its efficacy and the best indication still need to be further demonstrated by large sample studies.

(2) RFA combined with stent implantation in the treatment of unresectable extrahepatic cholangiocarcinoma:

Surgical treatment is generally recommended for extrahepatic cholangiocarcinoma, but radiotherapy and chemotherapy, biliary stent implantation and other methods are generally adopted clinically for extrahepatic cholangiocarcinoma that cannot be operated. Simple biliary stent implantation cannot intervene the disease fundamentally, but can only relieve biliary obstruction and improve the symptoms.

A multicenter study conducted by Shanghai Oriental Hepatobiliary Surgery Hospital and other hospitals compared the efficacy and safety of RFA combined with stenting (RFA group) versus stenting alone (control group) in the treatment of unresectable extra hepatic cholangiocarcinoma. It proved that the addition of RFA improved overall survival and quality of life at this circumstance, compared with stenting alone.

Therefore, endoscopic RFA is a safe, effective, simple and outpatient method for the treatment of gastric LGIN, and has a good clinical application prospect.

At present, the expert consensus on the standardized diagnosis and treatment of low-grade gastric intraepithelial neoplasia has been widely promoted and applied in China, with more than 10 hospitals participating in the multi-center research.